Over the years, I’ve heard many generalizations made about Sindhis: that they have ‘aani’ surnames, that they are overly cautious with money, that they look and speak in a certain way and that their Sindhi Kadhi tastes good! Let’s see how much of that applies in my own case: my maiden name was Puri–a simplified version of the actual name Shahdadpuri (so non-aani); I’d give myself 6/10 on money management (so nothing fantastic); I’m often told that I look South Indian; and well, on the last one I tend to agree that Sindhi Kadhi does taste great–especially, when someone else makes it for me! Either way, I’m sharing the recipe of Kadhi the way my mother makes it. This Kadhi takes many vegetables so it’s no surprise that it’s served simply with plain rice and roasted paaper. In some Sindhi families, I’ve seen sweet boondhi offered on the side but my mother hasn’t ever put the two things together, and I haven’t dared either. 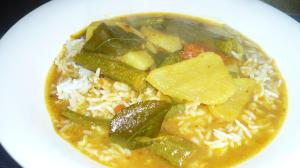 Here’s the way to deal with it all:

In a big pressure cooker, heat the oil and let methi dana and jeera splutter slightly.

Add besan and stir it on a medium to slow flame till it looks nicely roasted (about 8-10 min) – my mother’s tip is that the whole house should smell of roasted besan to treat it as ready for the next step.

Add about a litre of water and a cup or two more. Maintain some distance as the water tends to jump about as it touches the hot cooker base.

From all the vegetables to be put in the kadhi, at this stage add only Kamal kakri, potatoes and drum sticks to ensure they get cooked well.

Shut the cooker and let the pressure build till just about 1 whistle. Then switch off the gas.

As the pressure is released, open and revel in the sight of well-mixed besan in water. Earlier, you may have noticed some small lumps of besan but hopefully none after pressure-cooking.

Add the remaining vegetables except bhindi.

In 2-3 minutes, add kookam and amchoor and let it all boil on a medium to high flame.

All the vegetables should be fairly cooked  in the next 10-15 min but let the boiling continue.

Taste the kadhi for sourness, salt and chilli. If Kookam and Amchoor haven’t made the kadhi sambhar-like sour, add 2-3 teaspoons of tamarind water. Add more salt and red chilli powder, if necessary. The besan and sourness moderate the effect of chilli powder so go ahead and put some more. The kadhi should keep boiling through various stages of tasting and checking.

The consistency of well-cooked Sindhi kadhi is slightly thinner than honey but not watery thin.

Somewhere in between, fry bhindi halves in 3-4 teaspoon oil in a pan.

As the kadhi looks nearly done, add fried bhindi to it and give it a quick boil before switching off the flame.

For that professional and glazed look, give it a tempering of 10-12 fried curry leaves. Finish the look by sprinkling 1 tablespoon of chopped coriander leaves.

Kadhi is then ready to be placed in a large serving bowl beside plain white rice in another large bowl.

People can take some rice in large soup bowls and ladle kadhi on to the rice till the latter is somewhat submerged.

* Kookam is dark brown in colour and is the peel of a sour walnut-sized fruit. It isn’t seen commonly but conventional grocery shops stock the dried peel. It’s available in abundance as fresh fruit, dried peel, sherbat and even vinegar in Goa.

View all posts by jyotibhargava