This is an easy meal to put together but one that has required some tweaking over the years. Both Kishore and Kabir enjoy it equally so I keep its ingredients close at hand for those evenings when a non-fussy Italian meal is called for.

Over the years, I’ve successfully substituted chicken mince for lamb mince and still seen enough enthusiasm for the dish. But I do use lamb mince on occasions even now. One of the wonderful aspects of the dish is that it requires very little meat but still provides adequate sauce for a filling meal. 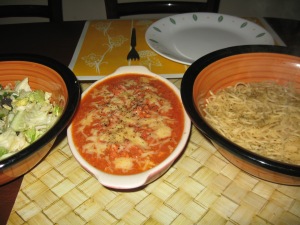 Any brand of dry spaghetti: about half a packet of Delmonte has proved to be enough for the 3 of us.

Salt and ¼ teaspoon of oregano for Spaghetti

Here’s the way to deal with it all:

Pour in 2 cans of tomato puree and after a quick stir, add torn basil leaves.

After a minute of cooking on a high flame, add washed mince and mix it with the sauce on a medium flame.

Add salt, sugar and pepper and stir some more.

Add a cup of water to dilute the gravy and to buy time for the mince to cook. About half of this water has to be allowed to evaporate. Keep a medium to low flame.

In 2-3 min, add grated cheese after saving about a tablespoon.

Cook for 20 min or thereabouts on a low flame. The sauce should show cooked mince spread evenly and the melted cheese having lent a creamy look to the sauce. The consistency should be pourable so if the sauce appears too thick, 2-3 tablespoons of water would help lighten it. Give it another 2-3 min of cooking if you’ve added more water. Adjust the salt before turning off the flame.

Remove the sauce to a large serving bowl, sprinkle the remaining grated cheese on it and cover the bowl with a large plate to trap the steam and help this cheese melt somewhat. The dish is then ready to go to the table.

Around the time cheese was added during cooking of the sauce, the spaghetti can be put to boil. Bring water to a boil in a saucepan, add a teaspoon of salt to it, allow it to get mixed before adding spaghetti broken into two. After 10 min of cooking, spaghetti would be almost done. Take out a strand and taste it. I find the state of al dante about right for spaghetti but raw for penne so do figure out the texture you need.

Strain spaghetti in a colander. Remove to a large dish, sprinkle some oregano on it, and keep it covered till you’re ready with the meat sauce.

To eat, people can take some spaghetti onto their plates and ladle on enough sauce to make it juicy. Some grated parmesan on top won’t feel out of place.

Some of you may also enjoy a piece of warm garlic bread on the side!

View all posts by jyotibhargava